By Dr. Matthew Clifford-Rashotte and Dr. Natasha Press on June 24, 2020

What frequently asked questions I have noticed

A 25-year-old man presents to your clinic for routine sexually transmitted infection (STI) testing. He has no symptoms nor known contacts with STIs. He has a history of previously treated syphilis, but is otherwise well.

How should these results be interpreted?

We frequently encounter questions about the interpretation of syphilis serology and about the appropriate treatment of various clinical stages of syphilis.

Data that answers these questions/gaps

Syphilis rates have been rising in British Columbia, and across Canada, since the early 2000s1. In order to control this epidemic, clinicians must test at-risk patients, and interpret tests correctly in order to provide appropriate treatment. Interpretation of syphilis serology can be challenging, and misinterpretation may result in undertreatment or overtreatment, depending on the context.

In the first half of 2019, two cases of congenital syphilis were reported in British Columbia, the first cases since 2013. As a result, the BCCDC has released an interim guideline2 recommending testing during two timepoints in pregnancy – during the first trimester or at the first prenatal visit, and again at the time of admission for delivery, or at 35 weeks for those who will not be giving birth in a hospital.

Serologic tests for syphilis are divided into two categories1:

Here are some examples of common serologic patterns and their interpretation:

Serologic tests, combined with the clinical history, are used to determine the stage of infection, which then dictates appropriate treatment.

All stages of early syphilis are treated with IM penicillin G benzathine (2.4 million units)3, long-acting formulation, divided into two doses of 1.2 million units each, administered in the right and left ventrogluteal sites.

Late latent disease, or cardiovascular/gummatous disease without neurosyphilis, are treated with three weekly doses of IM penicillin G benzathine (2.4 million units)3, long-acting formulation, each divided into two doses of 1.2 million units each, administered in the right and left ventrogluteal sites.

Neurosyphilis is treated with 14 days of aqueous penicillin G IV (IM therapy used for other forms of syphilis is not adequate, as it does not reach high enough concentrations in the central nervous system)3. Patients presenting with eye or ear symptoms may also have neurosyphilis, or require IV treatment, and should be assessed for this. 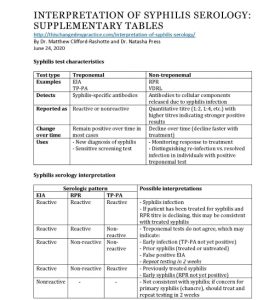 9 responses to “Interpretation of Syphilis Serology”